It's the supergroup everyone's been waiting for, but no-one was expecting! The Grateful Dead is continuing its voyage as the greatest jam band of all time, but this time it has multi-platinum selling, Grammy Award-winning singer/songwriter and guitarist John Mayer at the helm! Dead And Company comes to Jiffy Lube Live on Thursday 23rd June for a night of mind-blowing psychedelic prog like you've never seen it before! 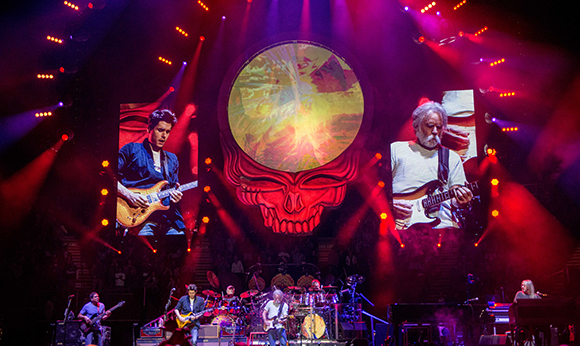 Three of the "core four" members of the Grateful Dead, Bob Weir, Mickey Hart and Bill Kreutzmann, have teamed up with multi-platinum selling Grammy Award-winner John Mayer, Grammy Award-winning virtuoso Oteil Burbridge, and RatDog band member Jeff Chimenti to create Dead and Company. Mayer invited Weir to join him in a studio performance when guest hosting The Late Late Show, having become an avid fan of the Grateful Dead a few years previously. The two became friends and they decided to embark upon a project together, with Mayer learning the Grateful Dead back catalog while the surviving members of the band prepared for their hugely successful Fare Thee Well Tour. Initially only announcing one concert for October 31 2015 at Madison Square Garden in New York, response was so positive, they added a further 21 shows and developed it into a full tour.