Are you lost and looking for an out-of-the-ordinary country music fix? Just follow the path paved by the Florida Georgia Line as they come cruisin' to a venue near you. One of their most anticipated stops will be at the Jiffy Lube Live on Saturday 23rd October 2021. This country music duo is now gaining popular attention particularly from a burgeoning crown of youngsters who dig their "bro-country" sound — a quirky and amusing fusion of country with elements from rock and hip-hop music. Florida Georgia Line's I LOVE MY COUNTRY TOUR 2021 is getting a lotta love from their fans who are now rabid to get their hands on tickets to the show. The 'Get Tickets' link on this site is a quick and easy way to lock in those tickets. Hurry, book your tickets now! 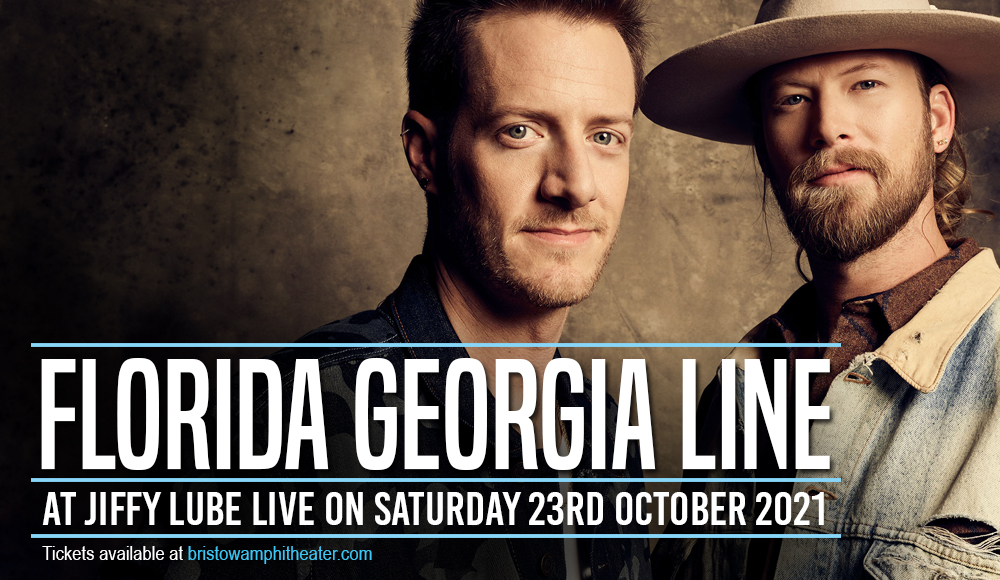 Nashville, Tennessee , the home and heart of country music has found two of its long lost sons all the way from Florida and Georgia. Tyler Hubbard and Brian Kelley are originally from Monroe, Georgia, and Ormond Beach, Florida, respectively. Destiny has brought them together as they got together as a country music duo and name themselves Florida Georgia Line. They started out as a began as a cover band. They developed their style and evolved with a sound that takes elements from rock and hip-hop music, stitching itself to strains of country music. The resulting sound can be heard on their 2012 debut single "Cruise". This single was a commercial mammoth that broke new ground on the country music frontier. The has broken two major sales records — garnering over seven million downloads, making it the first country song ever to receive the Diamond certification. It was also ranked as one of the best-selling digital country songs, staying at number one for a whopping 24 weeks at the charts. Florida Georgia Line has also unlocked a pioneering sound dubbed as "bro-country", said to be a fusion with 'hick-hop' sounds and tends to cover subject matters such as partying, drinking, driving trucks and sexual attraction.

The electrifying presence and impassioned energy of Florida Georgia Line is best and most evident on the live stage. “Touring is back, y’all! This is the longest we’ve gone without being on the road, and we’ve been counting down the days until we can finally say – we’re going on tour! Thank you to our fans for all of your support with our new music over the past year, we truly can’t wait to bring these tunes to the stage,” shares FGL’s Tyler Hubbard and Brian Kelley. “We’re excited to see your faces, feel the energy, and bring some good vibes to your city this fall. Let’s make some new memories!”

And with that spirited invitation from Florida Georgia Line, you'd definitely would not want to pass up on such an incredible concert experience. Go, get your tickets now!