It's been a long ol' wait for Tim McGraw fans, but the country music legend is finally back on the road for his first solo tour in five years this summer! The best-selling singer is embarking on an extensive cross-country stint, calling in at 30 cities across the US, and calling in at Jiffy Lube Live on Saturday 18th July 2020! The artist will not only be performing from his immense, hit-filled back catalog, but he'll have brand new material for fans from an upcoming new album to be released later this year! He'll also be joined by some truly excellent country acts in support – Midland and Ingrid Andress! 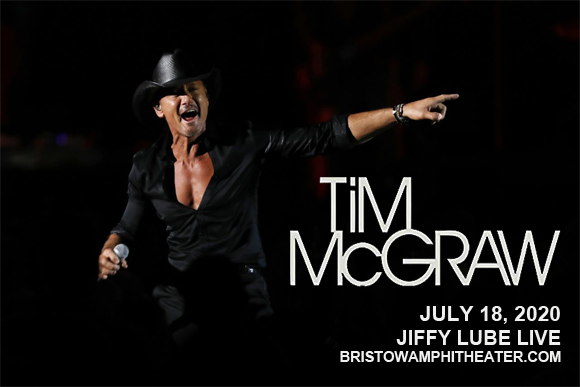 Tim McGraw is one of the world's best-selling music artists of all time, having sold over 80 million albums worldwide. After signing with Curb Records in 1992, having dropped out of college in 1989 to move to Nashville and pursue music full-time, McGraw released his self-titled debut album in 1993. Although his debut did not have the impact he had hoped, McGraw's second studio album, Not a Moment Too Soon (1994), was a huge hit and he became country's most promising new star. The album was the best-selling country album of 1994, reaching number one on both the Billboard 200 and Top Country Album charts and winning McGraw two ACM Awards. His status as country music royalty was cementing in 1996 when he married fellow country star Faith Hill in a high-profile ceremony. McGraw's music continued to be hugely popular too, as he released a string of hit singles and albums, and replaced Garth Brooks as country's biggest male star. Over the course of his career, McGraw has released 15 studio albums, 10 of which have topped the country charts, and 25 of his 65 singles have also reached number one. He has won three Grammy Awards, 14 Academy of Country Music awards, 11 Country Music Association (CMA) awards, 10 American Music Awards, and three People's Choice Awards to date, and his Soul2Soul II co-headlining tour with his wife was the highest grossing tour ever by a country artist until Taylor Swift's "The Red Tour" in 2014, and one of the top five grossing tours of any musical genre.