Get ready for a massive nostalgia show on Sunday 26th August 2018!! On their Never Ending Summer Tour, it’s none other than massive 90s bands 311 and The Offspring!! It’s all happening at Bristow’s own Jiffy Lube Live amphitheater – don’t miss out!! Grab your tickets now for this amazing show while you have the chance!! 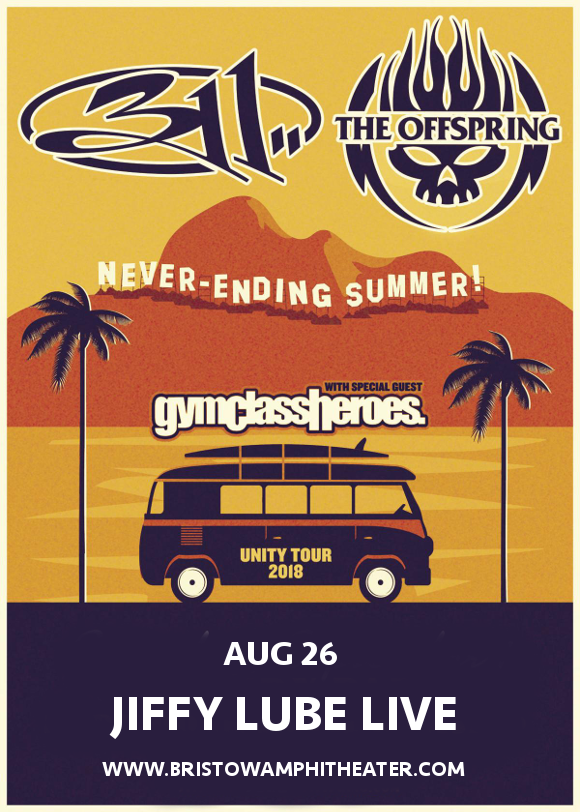 Since 1984, The Offspring have been defying convention and bringing punk back to a huge audience, and to this day are widely considered to be one of the best-selling and most influential punk bands of all time. After their last release in 2012, “Days Go By,” fans have been eagerly anticipating The Offspring’s next release. Now, it looks like that time might finally be approaching. "It is true. We're working on it,” confirmed frontman Dexter Holland, saying that the record would be released in “2018, for sure.” Noodles, the band’s guitarist, said; “We’ve got a few songs already done. We want to do a couple more and we definitely wanna get something out soon. Our fans have waited long enough, I think, so we want to get something in their hands that they can listen to and hold and put in their ears.”

Some of the new songs might just be ready to be performed at the show!! Get ready to be among the first to hear The Offspring’s new album live – grab your tickets LIVE!