Weekend Warrior Brad Paisley comes to Jiffy Lube Live on Saturday 25th August 2018 for a night of electrifying country music! The three-time Grammy Award-winning singer will be performing plenty of his chart-topping hits alongside tracks from his smash hit album Love and War! He'll be joined on the Weekend Warrior World Tour by Dan Tyminski and Kane Brown in support, making one hell of a lineup! 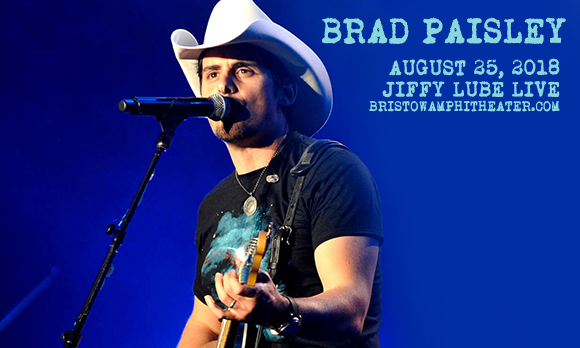 One of country's hottest stars, Brad Paisley burst onto the scene in 1999 with the release of his debut album Who Needs Pictures. Just two years later, Paisley was inducted as the youngest ever member of the Grand Ole Oprey. Winner of three Grammy Awards, fourteen Academy of Country Music Awards, fourteen Country Music Association Awards, and two American Music Awards, Paisley holds the record for the most consecutive number one singles on the Billboard Hot Country Songs chart (ten) and he has scored thirty two top ten singles in the chart, including eighteen number ones. He has sold over 12 million albums and has recorded ten studio albums to date, as well as a Christmas album, with each receiving gold status or above from the RIAA. His most recent album, Love and War, was released in 2017.