Multi-platinum-selling country superstar Brad Paisley has announced another leg of his hugely popular Life Amplified World Tour, and he's coming to Jiffy Lube Live on Saturday 9th September 2017! After the incredible success of last year's run, Paisley will once again be joined on his North American stint by pal Dustin Lynch, up-and-comer Chase Bryant & Canadian songstress Lindsay Ell, bringing a stellar line up, for one of the hottest country shows of the year! 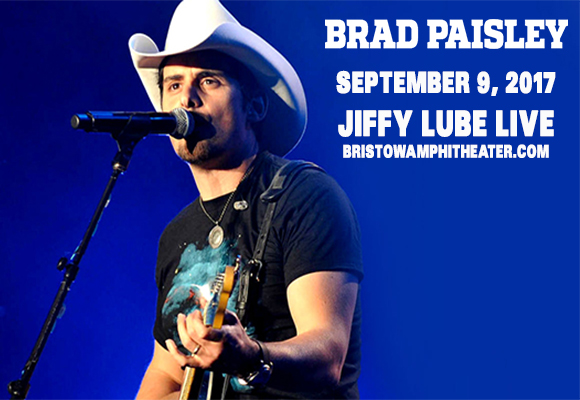 Winner of three Grammy Awards, 14 Academy of Country Music Awards, 14 Country Music Association Awards, and two American Music Awards, country artist Brad Paisley launched into the music scene with the release of his 1999 debut album Who Needs Pictures. To date, Paisley has released ten studio albums and a Christmas compilation, all of which have been been certified by the RIAA as Gold or above. Paisley has had 32 Top Ten singles on the Billboard Hot Country Songs chart, 18 of which have reached Number One, and as of 2009 he holds the record for having ten consecutive singles reaching the top spot on that chart. In 2001, Paisley became the youngest ever member to be inducted to the Grand Ole Oprey.