As they hit the road this Fall on their Reboot tour, Brooks and Dunn are getting ready to make this one bigger and better than ever! The incredible Country duo are about to celebrate thirty whole years since it all began – join them as they perform LIVE at Jiffy Lube Live on Saturday 2nd October 2021! Don't miss out, book your tickets and come and be a part of the crowd this September! 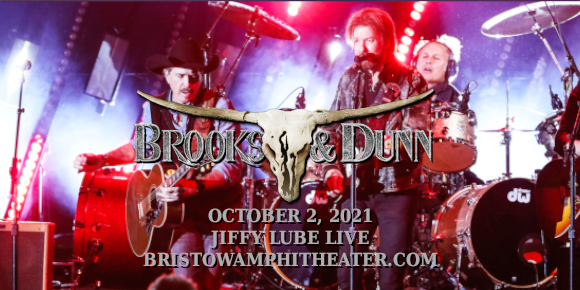 If you're a fan of Brooks and Dunn and their flawless, hit songs then whatever you do this Fall – make sure to catch them as they play live in concert at a venue near you.

The show stopping Brooks and Dunn have given a vast amount of music over the years, first grabbing the spotlight during the 1990s. Brooks and Dunn became known for their songwriting talents previous to this while writing hits for fellow artists on the scene. As both Brooks and Dunn realised they were set for bigger and better things, they quickly turned it all around and followed their dream and passion as a music duo. As record labels caught wind of the exciting new name on the scene, Arista Nashville signed them up and the rest is truly history, as they have gone on to create a long standing career within their own right over the past three decades!

Books and Dunn have since become well known for their successful single and album releases and they most notably grabbed the number one spot with a whopping twenty songs out of a whole fifty released to this day! As Brooks and Dunn took over the Hot Country Songs chart, they became known as one of the best duos in Country, with songs such as "My Maria" (a cover of the B.W. Stevenson song) and "Ain't Nothing 'bout You."

As the duo hit the road now in 2020, they are set to celebrate their incredible achievement of reaching thirty years since the duo began. With their much loved music, not just within the US, but internationally, they are still as popular as ever and are now one of the most classic country duos of all time.

Get ready to celebrate with them this Fall! There's no time to waste, grab your tickets and head on down to Jiffy Lube Live!