Are you ready for the 80s throwback tour of the year?? You heard right, 2019 marks the year that two HUGE icons will hit the road together for just 8 very special shows across the United States. Coming soon to Jiffy Lube Live… Bristow’s premier live music venue is proud to present Bryan Adams and Billy Idol, live on Monday 12th August 2019!! Don’t miss this – grab your tickets now, before they sell out!! 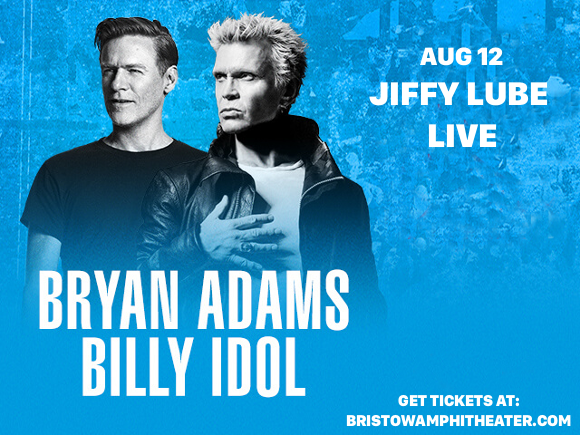 Known for his massive smash hits “Summer of '69," "Run to You," "Cuts Like a Knife" and "(Everything I Do) I Do It for You,” Bryan Adams is one of the biggest popular rock stars the world has ever seen. His first album, “Cuts Like a Knife,” began to gain him traction in the US, and his second, “Reckless,” turned him into a household name worldwide. He has received a staggering number of awards and nominations, including 20 Juno Awards and 15 Grammy Awards.

Rising to fame on the London punk rock scene as a member of the band Generation X,  Billy Idol moved on to pursue a solo career and released his debut, self-titled album in 1982, to success both in the UK and in the US as part of the Second British Invasion. His singles “White Wedding,” and “Dancing With Myself,” gained heavy rotation on the then recently-established MTV. He followed this up with the iconic album “Rebel Yell,” which went on to earn double platinum certification from the RIAA.

A show like this doesn’t come around every day – make sure you’re there to see it when it does!