It's time for some powerful rock as two legendary bands, Chicago & REO Speedwagon, come to Jiffy Lube Live on Wednesday 25th July 2018 as part of a mighty co-headlining tour! With Chicago playing their renowned Chicago II album in its entirety and REO Speedwagoon playing a plethora of fan favorites, it's going to be an epic show! 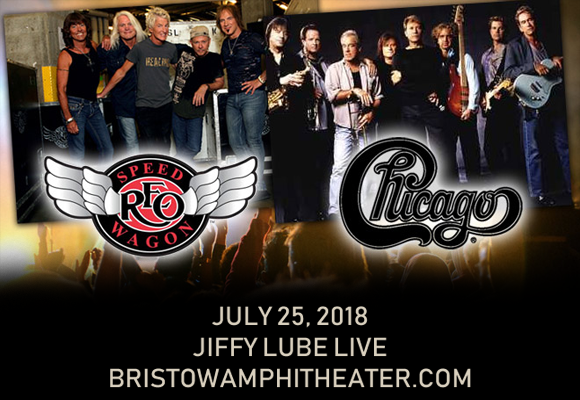 Originating in Chicago, Illinois in the mid-1960s, Chicago are second only to the Beach Boys as the most successful American rock band of all time, both in terms album and single sales. Under the name Chicago Transit Authority, the band's eponymous double-disc debut was released in 1969 and by 1970 was platinum certified, selling over one million copies. After shortening their name for the release of their follow-up album, which launched the top-ten hits "Make Me Smile" and "Colour My World", Chicago found success with a string of hits throughout the 1970s and 1980s. To date, the band has sold over forty million units in the US, with twenty three gold, eighteen platinum, and eight multi-platinum albums, and according to Billboard they were the leading US singles charting group during the 1970s. The band have charted five consecutive number-one albums on the Billboard 200 and twenty top-ten singles on the Billboard Hot 100.