Calling all fans of Chris Brown!! The rap superstar is back with a MASSIVE North American tour in support of his 8th album, the amazing “Heartbreak On A Full Moon”!! Huge support acts Rich The Kid, H.E.R. and 6LACK will join Chris Brown on select tour dates. He’s headed for the Jiffy Lube Live on Thursday 12th July 2018 – tickets are on sale NOW! Grab yours direct from this website to avoid service charges and shipping fees! 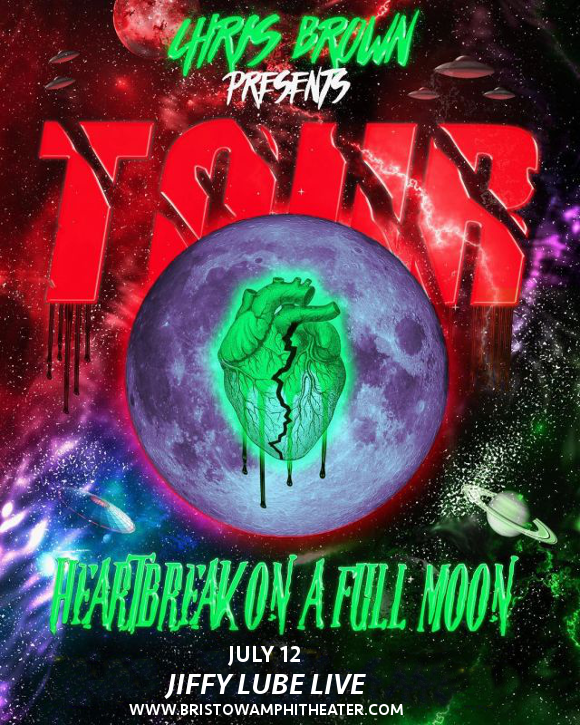 Breaking onto the international major music scene as a teenager in 2005 with his debut self-titled album, Chris Brown established himself as a hit-making force, with his debut single, “Run It!” becoming the first since Diddy in 1997 to top the charts as a male solo artists’ debut!! Following that, he saw a whole stream of hit singles, both as a solo artist and in collaborations with major names such as T-Pain with "Shawty Get Loose" and "No Air" with Jordin Sparks.

His fourth album, “F.A.M.E” marked the highest selling point yet in his career, topping the charts and seeing a series of hit singles including "Beautiful People" "Yeah 3x", and "Look at Me Now". Now, he’s on tour with his latest album; “Heartbreak On A Full Moon,” featuring 45 songs and nearly 3 hours of music to delight fans!

Get ready to hear all the new material live, together with the smash hits!! Have you got your tickets yet??