Having picked up three Grammy Awards at the beginning of the year, country sensation Chris Stapleton will embark on his All-American Road Show this summer, bringing his unique All-American sound to Jiffy Lube Live on Saturday 13th October 2018! One of country's brightest stars, Stapleton's live shows are nothing short of phenomenal, and he'll be joined by special guests Marty Stuart & Brent Cobb in support! 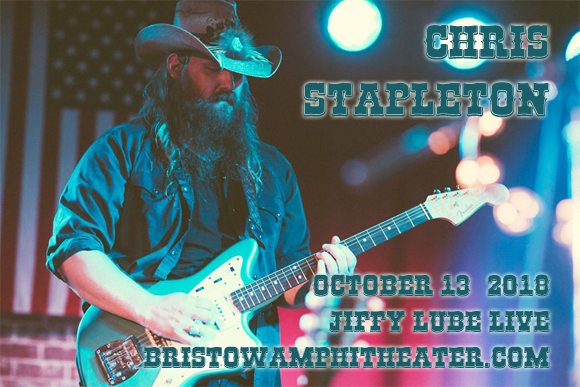 Winner of five Grammy Awards, five Academy of Country Music Awards, seven Country Music Association Awards and two Billboard Music Awards, among others, Chris Stapleton is an American country and bluegrass artist. Stapleton began his career as an industry songwriter and has  has co-written six number-one country songs, including "Never Wanted Nothing More" recorded by Kenny Chesney, "Love's Gonna Make It Alright" recorded by George Strait, "Drink a Beer" recorded by Luke Bryan and "Come Back Song" recorded by Darius Rucker. Over 150 of Stapleton's songs have appeared on albums by other artists. After a stint as frontman of Grammy Award-nominated bluegrass band The SteelDrivers (2008 – 2010), Stapleton signed a solo deal with Mercury Nashville in 2013, releasing his debut solo album Traveller in 2015.