The spectacular Chris Young comes to Jiffy Lube Live on Saturday 18th May 2019 on a brand new tour! The Raised On Country Tour (which takes its name from Young's recent upbeat single about the soundtrack to his early years) will feature a hot new set-up for the country star, bringing fans something they've never seen before! Joining Young in support will be another country Chris… Chris Janson! Tickets available now! 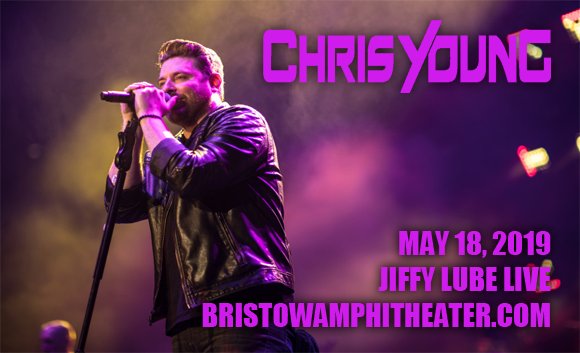 Winner of USA Network's reality television singing competition Nashville Star's fourth season, American country music singer and songwriter Chris Young released his self-titled debut album with RCA Records in 2006. The album entered the Billboard Top Country Albums chart at number three and the Billboard 200 at number 22. Three years later, he released his follow-up, The Man I Want to Be, which launched three number-one singles and earned him his first Grammy Award nomination. Young's progress from there has been steady, and has amassed six #1 singles, and seven Gold/Platinum certifications, as well as being described by USA Today as “one of country music’s most reliable hit makers”. Young's most recent release was 2017's Losing Sleep. That same year, country legend Vince Gill invited him to become a member of the Grand Ole Opry, and he was officially inducted by Brad Paisley.