Chris Young is back on the road this summer for his biggest most exciting tour yet! The ACM and Grammy Award-nominated artist has called the stint the “Town Ain’t Big Enough World Tour 2020” after his stunning break-up anthem and duet with Lauren Alaina! The tour sees the artist road-testing brand new material from his hotly anticipated upcoming album Raised On Country! The star, whose career is going from strength to strength, will be joined by Scotty McCreery & Payton Smith as support acts, and will be bringing his show to Jiffy Lube Live on Friday 10th July 2020! 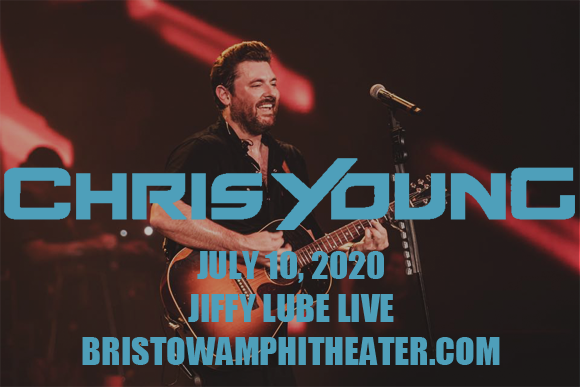 Chris Young began his career as the house singer of Cowboys Dance Hall in Arlington, Texas, but had his big break in 2006 when he successfully auditioned for the fourth season of the USA Network relaity television singing competition Nashville Star, going on to win the competition. Young won a contract with RCA Nashville, with whom he released his self-titled debut album album latet that year. The album was a moderate success, but it was The Man I Want To Be, his 2009 follow-up, that brought him acclaim, launching three number-one singles and earning him both a Grammy Award and an ACM Award nomination. Young has charted nine number-one singles on the Billboard Country Airplay Chart of 15 top five singles, and all six of his studio albums have hit the top 10 on the US Country Albums Chart, with four of them hitting the top five on the Billboard 200. In 2017, Young had the honor of being invited by country legend Vince Gill to become a member of the Grand Ole Opry, and was officially inducted by Brad Paisley that year. His seventh studio album, Raised On Country, is due for a 2020 release.