Dierks Bentley is going on a journey in more ways than one this summer! The red hot country superstar will be heading out on tour with exciting support in the form of Brothers Osborne & LANCO, and he's headed to Jiffy Lube Live on Friday 7th September 2018, where he's keen to bring something special to the party:

“It’s not going to be a big iowaska session,” he explains, laughing, “but it will be a lot of hangs and a lot of fun. The message is that we’re up for anything and we’re genuinely excited to spend time together.” 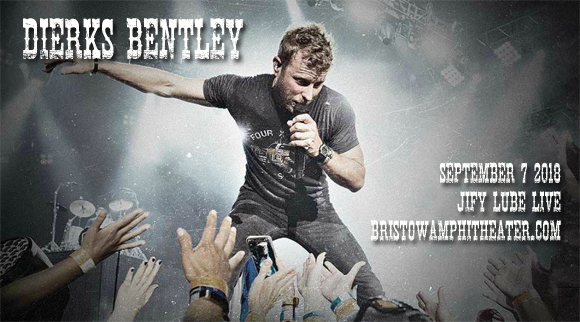 Signed to Capitol Nashville in 2003, and releasing his self-titled debut album later that year, Dierks Bentley has enjoyed success in country music from the very beginning of his career. Bentley's first two albums were certified platinum by the RIAA, and since then Bentley has released seven more successful albums, including a greatest-hits record, with his tenth album, The Mountain, due for release in 2018. To date, Bentley has charted twenty five singles on the Hot Country Songs and Country Airplay charts, including five top five hits and fifteen number-ones.