Country singer Dierks Bentley hits the road again this summer on his What the Hell World Tour! The "Drunk on a Plane" star will be joined by special guest support acts Cole Swindell & Jon Pardi, coming to Jiffy Lube Live on Friday 9th June 2017!

“Coming off the electricity and emotion of two nights at Red Rocks last week, it felt right to just go ahead and announce plans for next year and keep this thing rolling,” Bentley says in a press release. “There’s a song on my album called ‘What The Hell Did I Say’ and it seemed like an appropriate title for a tour with Cole and Pardi. I have a feeling I’ll be asking myself that question the morning after many of our shows and late night hangs because you really don’t know what will happen when the three of us get together. There has been a lot of drunk calls and texts between all of us over the last year trying to make this tour happen, and I’m excited we were able to pull it off.” 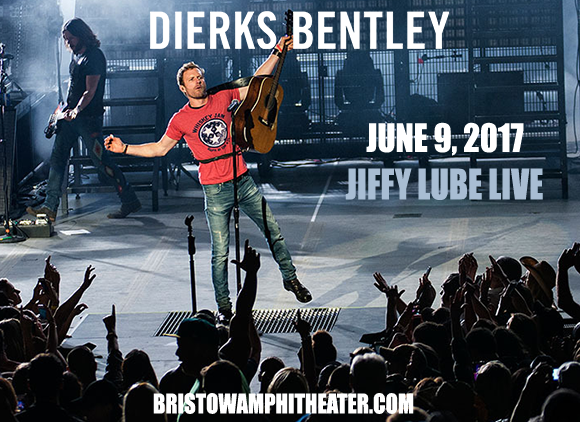 Arizona-born country music singer Dierks Bentley burst onto the scene in 2003 with the release of his self-titled debut album on Capitol Records, which was certified platinum by the RIAA, as was his 2005 follow-up Modern Day Drifter. Since then, Bentley has had huge success with nine studio albums (including a bluegrass album and greatest hits compilation) and eighteen singles, thirteen of which have reached number one in the charts, and seventeen of which have reached the top five. His most recent album, Black, was released in May 2016.