Heavy guitar riffs, deep throaty screams of pain and anguish, this is Five Finger Death Punch, with Megadeth, The HU, and Fire From The Gods coming to Jiffy Lube Live on Saturday, September 10th 2022. Get your tickets and get ready for your f***ing ears to bleed, this is going to be louder than that other silly “Metal Tour of the Year” c***. With four new albums coming out, every band here has something fresh to shove down your ear holes, 5FDP release Afterlife this year, Megadeth’s, The Sick, The Dying and The Dead, is set for July, The HU have an untitled, unreleased album ready since 2021 and Fire From The Gods started recording their latest album this January. 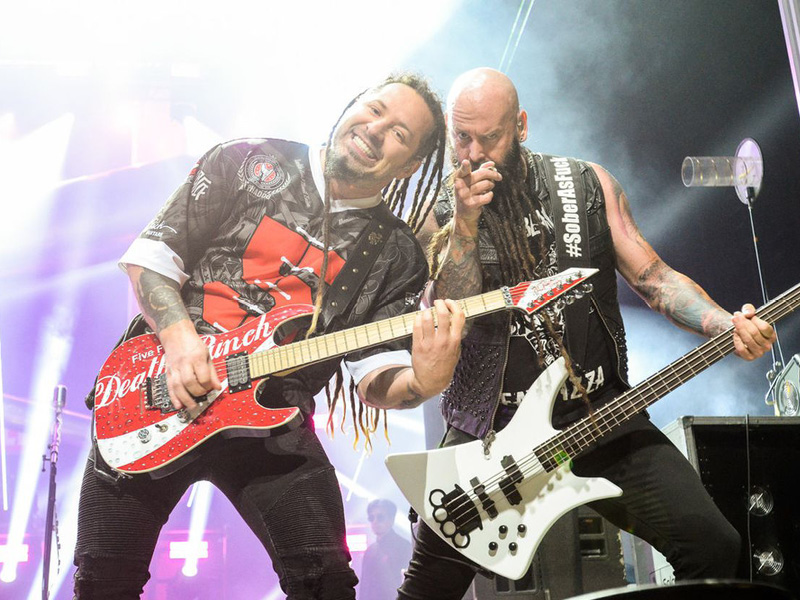 Five Finger Death Punch have dropped the title-track of their forthcoming ninth studio album, AfterLife. The band have stated that it will be their "arguably most diverse record of the band." Their previous album, F8, was released in February 2020, featuring the singles, "Inside Out", and "A Little Bit Off", both of which topped the Billboard Mainstream Rock songs chart. 5FDP are from Las Vegas, Nevada, formed in 2005, and are currently rhythm guitarist Zoltan Bathory, lead singer Ivan Moody, bassist Chris Kael, drummer Charlie Engen, and lead guitarist Andy James.

Megadeth, meanwhile, are tentatively slated to release their 16th album, The Sick, The Dying and The Dead, in July. The album follows their previous work, Dystopia, from 2016, which was widely considered a return to form for the band, debuting at number 3 on the Billboard 200 and the title track earned the band their first Grammy Award for Best Metal Performance in 2017. Megadeth is from Los Angeles, and is lead singer and guitarist Dave Mustaine, guitarist Kiko Loureiro, and drummer Dirk Verbeuren.

Mongolian folk rock and heavy metal band, The HU, is from Ulaanbaatar, Mongolia. Their first and only album, The Gereg, came out in September 2019, with Loudwire Magazine naming it one of the top 50 albums of the year. The HU is Galbadrakh "Gala" Tsendbaatar, Nyamjantsan "Jaya" Galsanjamts, Enkhsaikhan "Enkush" Batjargal, and Temuulen "Temka" Naranbaatar.

Formed in Austin, Texas in 2007, Fire From The Gods is lead guitarist Drew Walker, bassist Bonner Baker, rhythm guitarist Jameson Teat, drummer Richard Wicander, and lead singer AJ Channer. Their latest album, American Sun, came out in November 2019. And AJ Channer announced in December that the band would be going into the studio in January 2022 to begin recording a new untitled album.