It's one of the hottest country shows of the year, as Florida Georgia Line head to Jiffy Lube Live on Saturday 5th August 2017! The bro-country superstars have spent most of the last year on the road, and they show no signs of stopping, extending their hugely successful Dig Your Roots Tour all the way through this summer! Not only will the guys be bring you a larger than life FLAGA show, but they're also bring special guests: "Cruise" collaborator Nelly, and fellow country star Chris Lane! 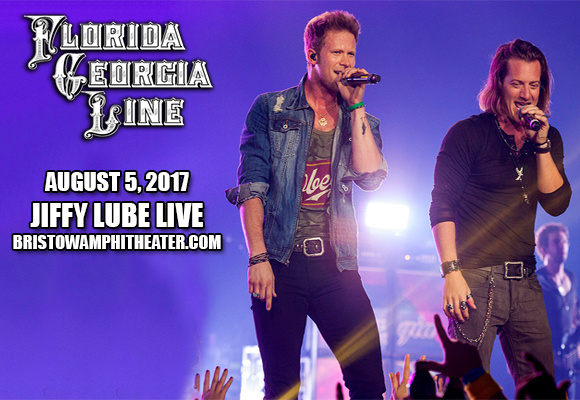 American country music duo Florida Georgia Line formed in 2008 when vocalists Brian Kelley and Tyler Hubbard met at Belmont University. Their first independent EP, Anything Like Me, was released in 2010, but it was 2012's single “Cruise” (from their major label debut Here's to the Good Times) that launched the band into the mainstream. The single reached #1 on the Country Airplay chart dated December 15, 2012, and a remix of the track, featuring Nelly, later hit #4 on the Billboard Hot 100. Considered their signature song, “Cruise” made history by becoming the best-selling country digital song of all time, with sales surpassing 7 million; and spent 24 weeks at #1 on Billboard's Hot Country Songs Chart, the longest reign in the history of the chart. The band released their second album, Anything Goes on October 14, 2014, and their third, Dig Your Roots, was released on August 26, 2016.