Foreigner changed the landscape of rock music forever with their larger-than-life, radio-friendly, chart-dominating hits like “Cold As Ice,” “Hot Blooded,” “Waiting For A Girl Like You,” and the mega anthem “I Want To Know What Love Is”! The band continues to tour every year, selling out areans as they go, earning their title as one of rock music's most popular touring acts! This year, Foreigner comes to Jiffy Lube Live on Friday 21st August 2020 on the Juke Box Heroes Tour, where they'll be joined by fellow Juke Box Heroes Kansas and Europe for a night full of tunes that represent one of the finest periods of rock music history! 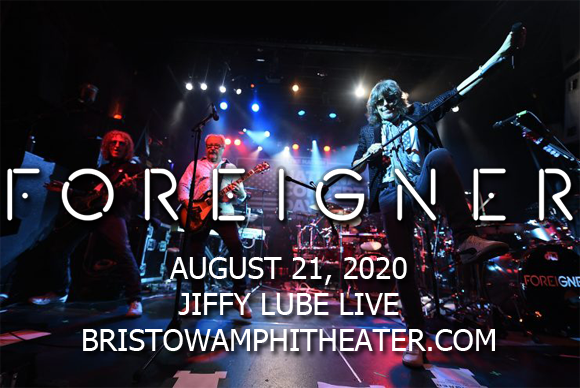 Formed in New York City in 1976, American rock band Foreigner was so named because it stemmed from a transatlantic collaboration, bringing together musicians from both America (Lou Gramm, Al Greenwood, Ed Gagliardi) and the UK (Mick Jones, Ian McDonald, Dennis Elliot). The band changed the landscape of rock music throughout the late-1970s and early-1980s with a string of multi-platinum-selling albums (they released six consecutive multi-platinum records from 1977-1984, and have released 10 in total throughout their career), including their five-times platinum eponymous debut album. With their huge commercial success over the decades, Foreigner have now become one of the world's best-selling music acts of all time, having sold over 80 million records ro date. They have also enjoyed mammoth charts success, with 16 top 30 US hits.