Always one to put on a memorable performance, Jason Aldean comes to Jiffy Lube Live on Saturday 15th August 2020 on his We Back Tour! The country music megastar never fails to bring the goods with his live shows, whipping up the crowd into a frenzy, dropping hit after hit in an impeccably-crafted setlist, and giving everyone a fun ol' time! This year's tour sees him performing from his 2019 album, 9, and joining him in support for one wild night will be fellow country acts Brett Young, Mitchell Tenpenny & Dee Jay Silver! 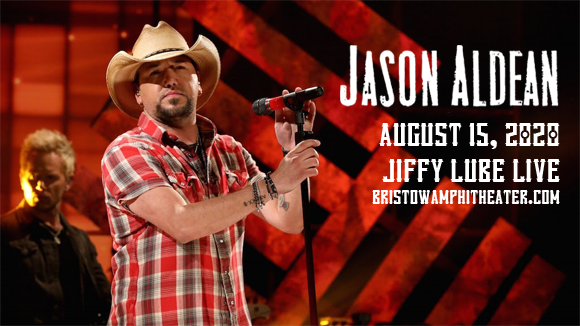 Third time lucky certainly rings true for country music star Jason Aldean! Determined to make it in the world of music, Aldean spent his years after high school performing the bars and clubs of his native Georgia, helped by his father who acted as his booking agent. In 1998, he was signed to Warner-Chappell, and made the move to Nashville to seek his fortune. However, his first record deal was a bust, leading to seven more years trying to make his way in Music City, having signed another unfruitful record deal with Capitol Records Nashville, before finally catching a break with Broken Bow Records in 2004. Broken Bow released his self-titled debut album the following year, which became a platinum-selling hit, launching several singles, including his first number one – "Why". Since then, Aldean's star has risen to the top, and he's seen success after success, with seven platinum and multi-platinum albums and an incredible 21 number one singles!