It's the time of year all "Parrotheads" have been waiting for, as King of Cool Jimmy Buffett comes to Jiffy Lube Live on Saturday 20th May 2017! With backing from his incredible Coral Reefer Band, Buffett will no doubt treat fans to a variety of his entertaining party hits and anecdotes, putting on an incredible show, as always! Don't delay in buying your tickets – having just turned 70, Buffett is performing fewer shows nowadays, so this may be your last chance to see this legend live! 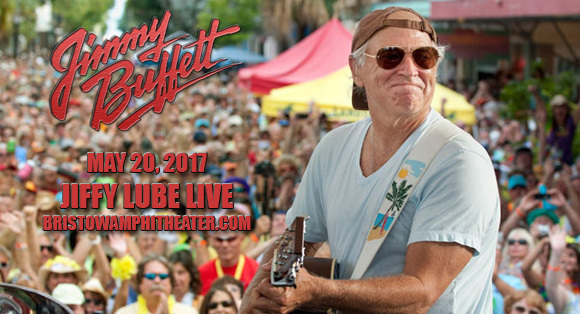 Known best for his party hits like “Why Don't We Get Drunk (And Screw)” and “Margaritaville” (ranked 234th on the Recording Industry Association of America's list of "Songs of the Century"), as well as his his humorous on-stage anecdotes, Jimmy Buffett is an American singer, songwriter, musician, author, actor and businessman. After initially embarking on a country music career, having signed his first record contract in 1970, Jimmy Buffett first came to prominence in the mid-1970s. Buffett moved from Nashville to Key West and, upon adopting an affable “beach bum” persona, gained a loyal following of fans, known as “Parrotheads”. He has been a huge presence on the touring circuit since, continuing to sell out shows year after year.