Jimmy Buffett comes to wow the crowd at Jiffy Lube Live on Saturday 7th August 2021 as he brings his famous feel good 'Beach Bum' set list to the stage for that perfect summer's day experience! You can expect to hear all of Jimmy Buffett's biggest songs to date, with a few surprises along the way – don't miss out on your chance to be a part of the exciting crowd! 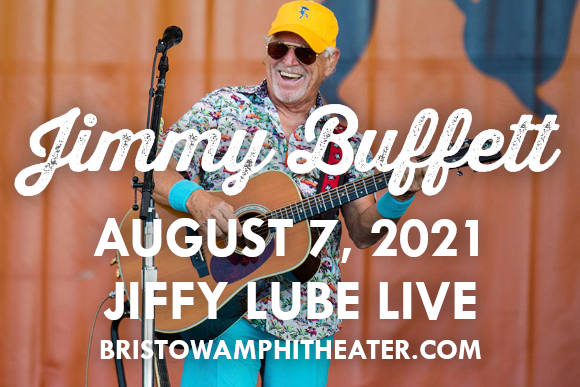 With his feel good, laid back music career, Jimmy Buffett has proven his talents, releasing incredible music over the years to his dedicated Parrotheads fan base. The unstoppable artist has transformed the music scene with his 'island style' music with his band Coral Reefer, together creating and producing songs such as "Margaritaville" which became listed in the songs of the century list by RIAA. Along with "Come Monday" and It's Five O'clock Somewhere." From the names alone, you can tell that Jimmy Buffett provides a positive, fun fueled party atmosphere at his live performances, which is why fans just can't get enough!

Jimmy Buffett first started on his musical journey back in Nashville Tennessee during the 1960's as mainly a country artist and then went on to creating and releasing to the world his debut album titled the folk rock Down to Earth by 1970. With his love of busking and sharing music with local people, he spent the next few years busking for tourists in New Orleans and later made a move to Key West where he created his famous beach bum style that he is still known for today.

Throughout all of his further releases, Jimmy Buffett captivated fans with a soundscape that truly takes you away and makes you feel like you are on vacation, by the pool, sipping on pinacoladas.

Come and enjoy the perfect concert for a mid summers day as Jimmy Buffett heads on down to Jiffy Lube Live and gives another unmissable experience!

"The interactivity with the songs is what makes a Jimmy Buffett concert so fun. It’s hard not to get swept into singing along to songs and chanting out, Salt, Salt, Salt after Jimmy sings that popular line, “Searchin’ for my long-lost shaker of salt”, from the song “Margaritaville”. Or putting your hands together up over your head as you bring your fins to the left, fins to the right, as the crowd all became dancing sharks for the song “Fins”. Along with so many other hit songs like, “Volcano”, “Son of a Sailor”, “One Particular Harbor”, “Cheeseburger In Paradise”, I could go on and on, there was absolutely no shortage of crowd favorites."