Kenny Chesney fans get excited!! Last year was pretty quiet for the country star, but that’s all about to change with 2018’s Trip Around The Sun Tour!! Together with Old Dominion, he’ll perform LIVE at the Jiffy Lube Live amphitheater on Friday 15th June 2018!! Don’t miss out on your chance to be part of this awesome show – grab your tickets NOW!! 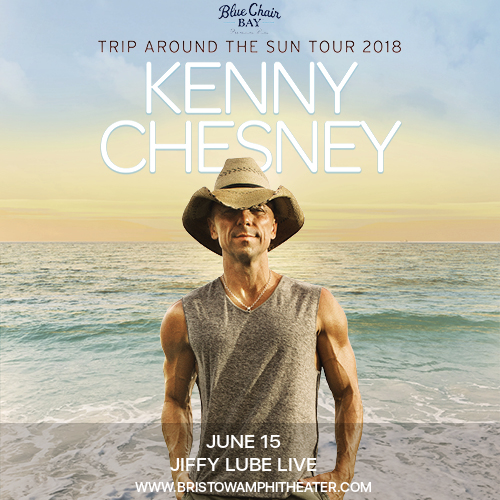 After a quiet 2017, Kenny Chesney is ready to return to his fans in a big way. Kicking off April 21st at Florida’s Raymond James Stadium, the Trip Around The Sun tour will see Kenny Chesney hitting a whopping 18 cities around the United States before wrapping up on August 24th at the Gillette Stadium just outside Boston. The tour comes just after the release of “Live from No Shoes Nation”, his second live album.

“You record songs, you put’em on a record,” Kenny said, talking about the difference between this album and his regular studio releases. “You know, people think it stops there. Even when it’s on the radio, that’s really between the listener and their life. But when you have people in your life like No Shoes Nation, I’ve come to believe, we figure out what these songs really mean when we get out there on the road and sing’em together!”

You’ve already got the album, but are you ready to be part of that singing crowd?? If your answer is YES then don’t delay – grab your Kenny Chesney tickets NOW while you still can!!