Get ready world – two of the biggest names in pop are on tour together in 2018!! That’s right, it’s Kesha and Macklemore, coming to the Jiffy Lube Live on Saturday 28th July!! Fans of either of these phenomenal artists can’t afford not to see this concert – tickets will sell out FAST so don’t delay!! Get yours now! 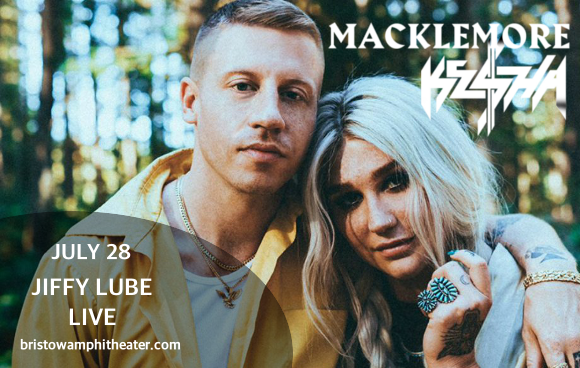 Kesha and Macklemore first worked together on a song for Macklemore’s recent second album, “Gemini,” entitled "Good Old Days”. Described as “the perfect record for personal reflection and self-love” by Respect, the single was hugely successful, and contributed for the album charting in the top 10 in multiple countries across the world, hitting number 1 on the US Independent Albums and US Top R&B/Hip-Hop Albums, as well as coming in number two on the Billboard 200!

For Kesha’s role in the song, Macklemore had nothing but praise. “She’s a musician, she's a writer, she's someone that is not afraid to try ideas in the studio, not afraid to get vulnerable in front of people, not scared to go for the high note when she doesn't know if she can hit it or not. She is a musician in every sense of the word, and she's hilarious."

Now, the two are doing the only logical thing and taking their collaboration forward to the next level – a huge 30-date North American tour! Get your tickets now for what promises to be one of the best pop shows of the year while you still can!