It's a double-whammy for metal fans as Korn & Alice In Chains team up for the most exciting co-headliner this year! Coming to Jiffy Lube Live on Wednesday 31st July 2019, the two bands will be performing hot new material – Alice In Chains from their 2018 album Rainier Fog (nominated for a 2019 Grammy Award) and Korn from their upcoming thirteenth studio album, which is their first new release in three years! Joining them in support will be fellow 2019 Grammy Award-nominees Under Oath! 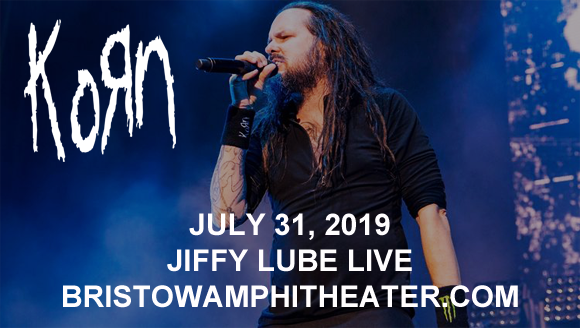 One of the pioneering bands of the nu-metal genre, bringing it to public attention throughout the mid to late-1990s and 2000s, Korn has sold over 35 million albums worldwide to date. In 1993, after three of the band's founding members (James Shaffer, Reginald Arvizu, and David Silveria) disbanded their previous group, L.A.P.D., Korn was formed. The band released its self-titled, major-label debut album in 1994 to moderate success, but it has since been recognised as establishing the nu-metal genre and has been certified double-platinum by the RIAA. To date, Korn has released seven platinum-selling albums, two double-platinum, one triple-platinum, one five-times platinum and two gold releases. Twelve of the band's official releases have peaked in the top ten of the Billboard 200 throughout their career, with eight peaking in the top five. The band's thirteenth studio album is due for release in 2019.