Country superstar Luke Bryan will "Light it Up" on the Jiffy Lube Live stage this summer, coming to Bristow on Saturday 18th August 2018 as part of his What Makes You Country Tour! A must-see live act, this energetic and talented performer always gets the party going, and this year he'll be joined by Jon Pardi & Morgan Wallen in support, for a night of damn good music! 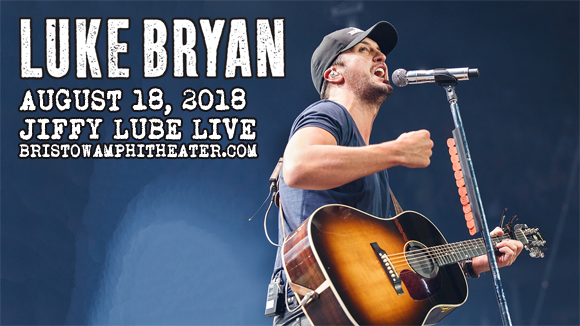 Originally making his living as a songwriter for other artists, Luke Bryan is now a massive country star in his own right, and has gone form strength to strength since the release of his 2007 debut album I'll Stay Me. With six smash hit albums and eighteen Billboard number-one singles to his name, Bryan is both a critical and commercial success, and to date he has sold over 7 million albums and 27 million singles worldwide. A highly-awarded artist and successful live entertainer, Bryan has been the recipient of both the Academy of Country Music Awards and Country Music Association Awards "Entertainer of the Year" award.