Bringing you a night chock full of incredible talent, one of North America's biggest bands right now, Pentatonix, comes to Jiffy Lube Live on Sunday 12th August 2018! Experience amazing feats of vocal acrobatics as the Sing-Off winners take you on a musical journey through some of the biggest hits of all time in their own incredible a cappella style! 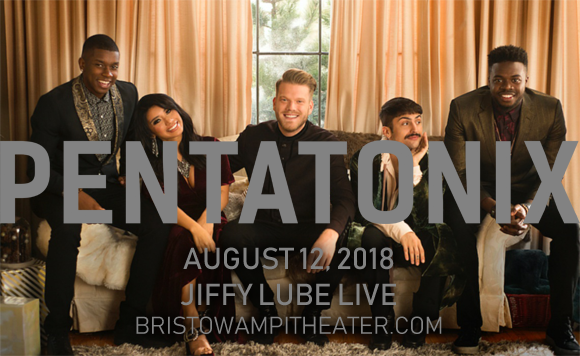 Best known for winning the third season of NBC's The Sing-Off in 2011, a cappella singing group Pentatonix consists of vocalists Scott Hoying, Mitch Grassi, Kirstin Maldonado, Kevin Olusola and Matt Sallee. Upon winning the talent competition, the group was awarded $200,000 and a recording contract with Sony Music's Epic Records. When the band was later dropped from the label, they went on to produce their own YouTube channel to showcase their vocal arrangements of chart hits and Christmas songs, which subsequently became the 50th most-subscribed-to YouTube channel with over 13 million subscribers and 2.7 billion views. The group released their self-titled debut studio album in 2014, which debuted at number one on the Billboard 200. The band have won three Grammy Awards to date, and they were the first a cappella group to win Best Arrangement, Instrumental or A Cappella, which they took home in both 2015 and 2016.