Hair metal fans, its time to get your finest 80s clothes out the wardrobe!! The Jiffy Lube Live is proud to present Poison and Cheap Trick on another AWESOME tour on Sunday 17th June 2018! For any Poison fan, this show will be the highlight of the year – get your tickets now and get ready to have “Nothin’ But A Good Time”!!! 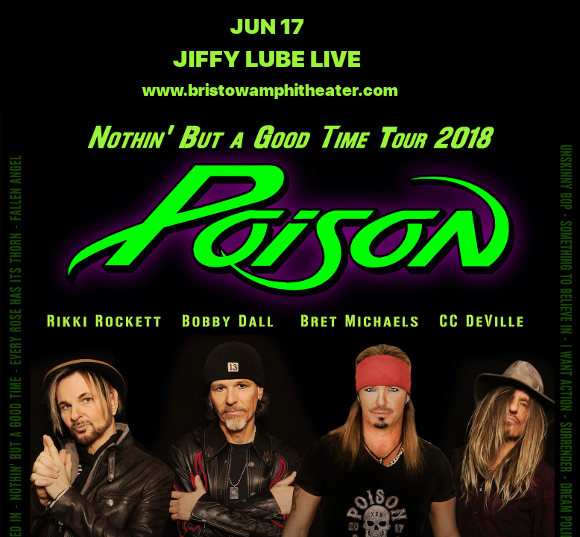 Formed in Pennsylvania in 1983, Poison rose to fame with their debut album, “Look What the Cat Dragged In,” and the charting hits "I Won't Forget You,” "Talk Dirty to Me,” and "I Want Action”. From then on, Poison were unstoppable, going on to become one of the greatest of the glam metal bands of the 80s, with ten top 10 singles and the smash hit Billboard number 1, "Every Rose Has Its Thorn”. Today, the band have sold over 45 million records across the world, including 15 million just in the United States, and accompanied their releases with huge global stadium tours!!

“Over the last years, Poison has got to co-headline with some great bands,” enthused Poison singer Brett Michaels. “….Def Leppard, Motley Crue, KISS, Lynyrd Skynyrd, to name a few, but I promise again: C.C., Bobby, Rikki and myself together will bring Nothing But a Good Time!!!” Cheap Trick share their positivity, with Rick Nielsen saying, "Another Poison / Cheap Trick Tour!!! It’s always been FUN with these guys!"

It’s going to be EPIC!! See you there – have you got your tickets yet???