One of the hardest-working country music groups out there, Rascal Flatts, are coming to Jiffy Lube Live on Saturday 30th June 2018 as part of their Back to Us tour, bringing their lively, heartwarming country pop to the stage for an evening of all-out hits! The beloved trio will be joined by an incredible support line-up of Dan and Shay & Carly Pearce! Tickets available now! 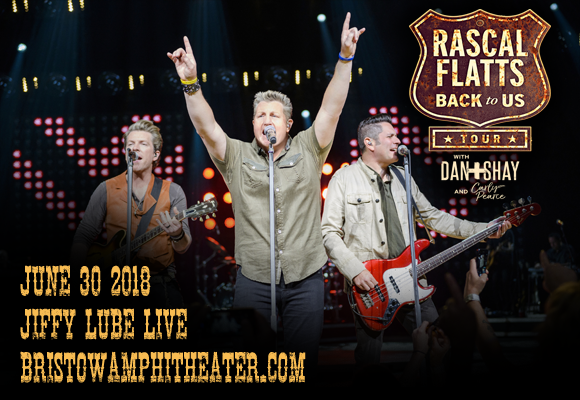 A staple of country radio, country-pop vocal group Rascal Flatts formed in Columbus, Ohio in 1999. The band, formed of Gary Vox (lead vocalist), Jay DeMarcus (bassist, vocalist, pianist, record producer and songwriter) and Joe Don Rooney (lead guitarist and vocalist), were signed to Disney Music Group's Lyric Street Records in 2000 and have since released seven consecutive albums on the label all certified platinum or higher by the RIAA. They have charted twenty-five top twenty singles on the Billboard Hot Country Songs Chart, including sixteen number one hits, and have sold over 23 million records and 10 million tickets to date.