“There’s Only One Way To Rock”, “Finish What Ya Started”… These are just some of the hits that rock supergroup Sammy Hagar and the Circle will be bustin' out when they take to the stage at Jiffy Lube Live on Thursday 23rd July 2020! Also taking to the stage, as part of this co-headlining tour, will be rockin' Brits, Whitsnake, who'll be playing tracks like “Here I Go Again”, “Still of the Night”, “Fool for Your Loving”, and “Is This Love,” among others! Who could resist a set-list like that?! Not to mention support from San Fran rockers Night Ranger! 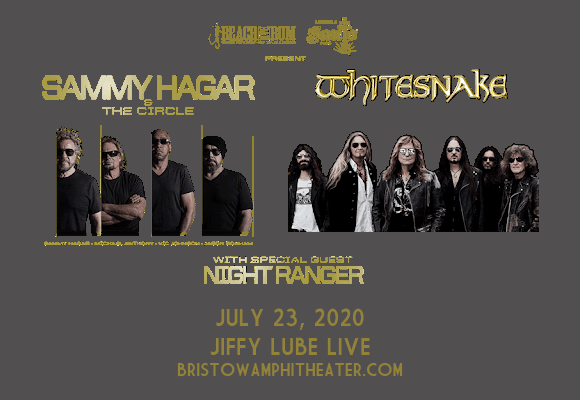 Known for their epic, boisterous rock anthems and mighty power ballads, British hard rock band Whitesnake was formed by ex-Deep Purple singer David Coverdale from the members of his solo backing band. After two moderately successful albums in the late-1970s, the group found its breakthrough with a series of four UK top 10 albums: Ready an' Willing (1980), Come an' Get It (1981), Saints & Sinners (1982) and Slide It In (1984). Slide It In was also a success in the US, where the band became hugely popular via their 1987 self-titled album, which went eight-times platinum. From 1990 – 2002, the group was officially disbanded, reuniting briefly in 1997 for the release of a stand alone album, Restless Heart. Since reforming, Whitesnke has released four more albums: Good to Be Bad (2008), Forevermore (2011), The Purple Album (2015) and Flesh & Blood (2019).