Get ready to groove to some life-changing music as Santana & Earth, Wind and Fire bring their co-headlining Miraculous Supernatural Tour to Jiffy Lube Live on Saturday 20th August 2022 (Rescheduled from Saturday 21st August 2021)! That's right – the two truly legendary bands, who have 19 Grammy Awards between them, will be performing a full set each of their best-selling, groundbreaking hits with all the passion and zeal that made them musical icons! Both bands have been inducted into the Rock and Roll Hall of Fame, and both broke new ground with their fusion of traditional sounds and rhythms with newer forms of music, blazing a trail for all those who came after! Not just a chance to dance, but also the chance to be in the presence of musical genius! 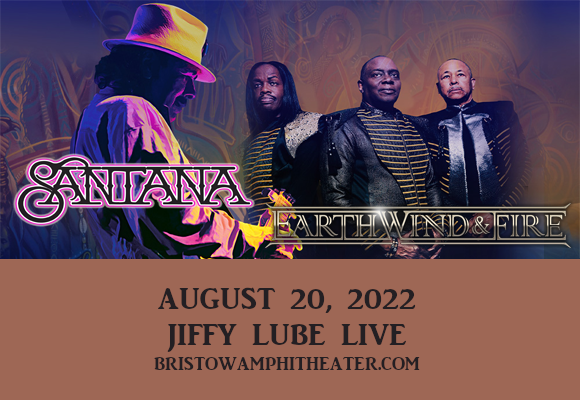 A virtuoso talent like no-one else in the world, Carlos Santana has a rare mastery over his instrument and plays with such unique flair that his musical presence is instantly recognizable to any listener. The world-renowned Mexican-American guitarist began his career performing with his bandmates in the Bay Area in 1966, and it didn't take long for the band's refreshing and innovative fusion of Afro-Cuban rhythms, traditional Latin sounds, blues, and rock to get noticed. In 1969, Santana was booked to play the now legendary Woodstock festival and their performance of the instrumental "Soul Sacrifice" was one of the most talked-about of the whole event. When the band released its debut album a few weeks later, it peaked at number four on the Billboard 200 and number 26 on the UK Albums Chart, which was just the beginning of their global success. Over the years, the group kept up a prolific pace with recording and touring until 1992, when they took a seven-year hiatus. They returned with Supernatural (1999), which won an unprecedented nine Grammy Awards for a single project (including Album of the Year and Record of the Year for “Smooth”), as well as three Latin Grammys. Today, Santana has sold more than 100 million records worldwide and in 1998 the group was inducted into the Rock and Roll Hall of Fame for its incredible contribution to music.