Two mighty metal bands. Two epic headlining sets. One incredible show!!! Shinedown & Godsmack come to Jiffy Lube Live on Sunday 19th August 2018 for one of the most exciting team-up tours of the year! Both bands will be performing from their respective new albums, bringing you a wealth of exclusive material for an unforgettable event:

“We’re preparing ourselves to be on the top of our game!” – Godsmack's Sully Erna 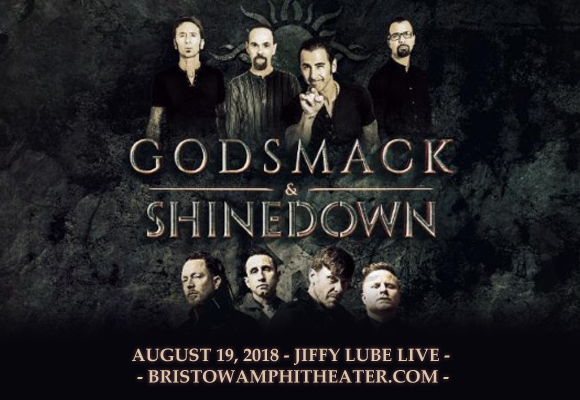 Consisting of founder, frontman and songwriter Sully Erna, guitarist Tony Rombola, bassist Robbie Merrill, and drummer Shannon Larkin, Godsmack is an American heavy metal band, formed in Lawrence, Massachusetts in 1995. The band made its debut with 1998's self-titled album, which was a commercial success, initially certified gold in 1999 and eventually certified four-times platinum by the RIAA in 2001. The band's follow-up, Awake (2000), enjoyed similar success, debuting at number five on the Billboard 200, launching the Grammy Award-nominated single “Vampires” and attaining double-platinum certification from the RIAA. The band has had three consecutive number-one albums (Faceless, IV, and The Oracle) on the Billboard 200, a feat for any band, and has charted twenty top ten rock radio hits, including fifteen songs in the top five, which is a record number of top ten singles by a rock artist. When Legends Rise, their seventh studio album, is slated for a 2018 release.