Hard rockers Shinedown have extended their Attention Attention World Tour and will be stopping in at Jiffy Lube Live on Thursday 19th September 2019! The unstoppable chart-toppers will be performing from last year's album of the same name, and have curated an epic support line-up for this year's stint on the road, calling upon veteran nu-metal band Papa Roach and Memphis alternative rock quintet Savage After Midnight as special guests! It's gonna be an insane night of heavy tunes! 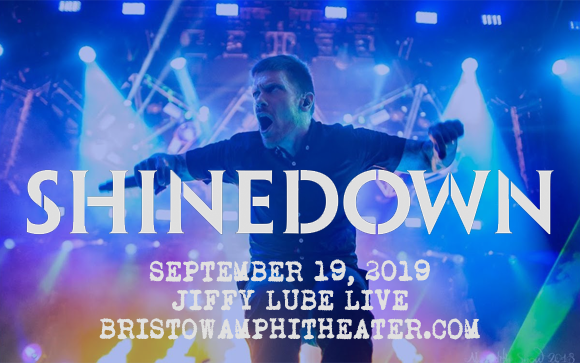 Formed in Jacksonville, Florida, in 2001 by singer Brent Smith, Shinedown is an American rock band. The group was conceived after Smith's previous band Dreve, who had signed to Atlantic Records the year before, was dropped from the label, whilst Smith was kept on with a development deal. Smith recruited Jasin Todd as guitarist, Brad Stewart on bass, and Barry Kerch on drums, and the group released its debut album, Leave a Whisper, in 2003. Since 2008, the group's line-up has consisted of Smith and Kerch alongside Zach Myers on guitar and Eric Bass on bass. To date, Shinedown has released six studio albums, selling more than ten million copies worldwide, and has had 13 number one singles on the Billboard Mainstream Rock charts, securing a tie with Van Halen for the second most of all-time, behind Three Days Grace with 15.