Get ready for some world-class, hard-hitting rock 'n' roll as Styx join forces with Joan Jett and The Blackhearts for a night of unstoppable classic rock hits! The mighty co-headlining tour will be making its way to Jiffy Lube Live on Friday 13th July 2018, bringing with it support for these iconic acts in the form of Tesla! What a line up, what a night! Get ready to let loose your inner rebel to the sounds of the '70s and '80s! 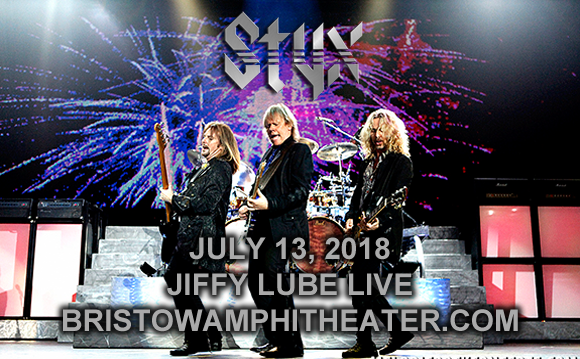 Best known for the songs "I Love Rock 'n Roll" (which was number-one on the Billboard Hot 100 for six weeks), "Bad Reputation", "Crimson and Clover", "Do You Wanna Touch Me (Oh Yeah)", "Light of Day", "I Hate Myself for Loving You" and "Dirty Deeds", Joan Jett is an American rock singer, songwriter, composer, musician, record producer and actress. Often known as the Queen of Rock or the Godmother of Punk, Jett formed the Blackhearts as a backing band for her solo career after the disbanding of her previous group, The Runaways. The band have performed together since 1979 and their most recent album, Unvarnished, was released in 2013.