2019 was a huge year for country music star Thomas Rhett with a new album, Center Point Road, an extensive summer tour and appearances on Saturday Night Live and The Late Show with Stephen Colbert! Now, the unstoppable sensation comes to Jiffy Lube Live on Saturday 29th August 2020 with a brand new show to perform songs from the Grammy Award-nominated album, as well as a bunch of fan favorites! He'll be joined for the show by good friend and fellow country singer Cole Swindell and up-and-coming country singer-songwriter Hardy! 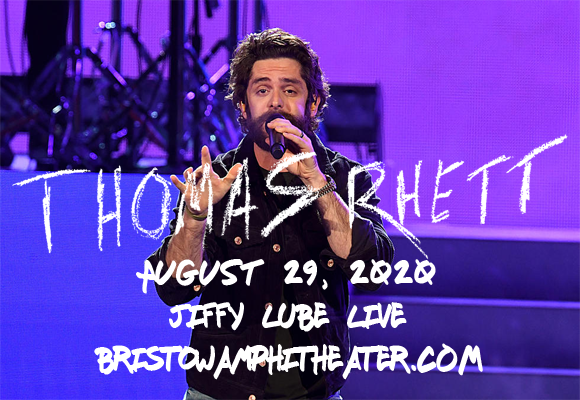 Thomas Rhett has country music in his blood. The son of country singer Rhett Aikins, he began his career in 2010 when he co-penned Jason Aldean's song "I Ain't Ready to Quit" from the album My Kinda Party, and he went on to write with artists such as Lee Brice, Florida Georgia Line, LoCash and Michael Ray, among others. In 2011, he signed with Valory Music (an imprint of Big Machine Records), releasing his top 30 hit debut single "Something to Do with My Hands" the following year. His debut album, It Goes Like This (2013), followed, charting in the top ten on both the Billboard 200 and the Top Current Albums charts. Rhett has released four studio albums to date, including the Billboard 200 number one albums Life Changes (2017) and Center Point Road (2019), the latter of which received a nomination for "Best Country Album" at the 62nd annual Grammy Awards in 2020.