It's an exciting time for fans of the 90s alternative music scene as two HUGE bands, Weezer & Pixies, come together for a joint headline tour that will rock your world! Headed to Jiffy Lube Live on Sunday 22nd July 2018, the bands will each be performing a headlining set, full of brand new tunes and classic fan favorites! 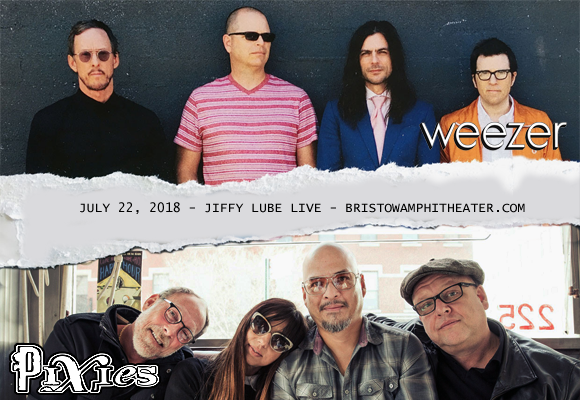 Formed in Boston, MA, in 1986, Pixies are an American alt-rock band, originally comprised of Black Francis (lead vocals, rhythm guitar), Joey Santiago (lead guitar), Kim Deal (bass, backing vocals) and David Lovering(drums), until Deal left the band in 2013 and was replaced by Paz Lenchantin. Known for their innovative fusing of musical genres and for influencing bands such as Nirvana, Radiohead, the Strokes, Bush, Blur and Weezer, Pixies put out their first official release, the Come on Pilgrim EP, on independent British label 4AD in 1987. They released four albums to critical acclaim (particularly in the UK and mainland Europe), with their 1989 single “Monkey Gone to Heaven” hitting the Top Ten in the US, and toured extensively before disbanding in 1993. Pixies reformed in 2004, releasing two more studio albums since then. Their most recent album, Head Carrier, was released in 2016.