Wiz Khalifa has kicked of 2019 with style! The Pittsburgh rapper performed a blinding set at Coachella and launched the Apple Music documentary series "Behind the Cam", plus dropping the surprise project Fly Times, Vol. 1: The Good Fly Young! Now, Khalifa comes to Jiffy Lube Live on Friday 19th July 2019 as part of his Decent Exposure Tour, which also features a mighty support line-up of French Montana, Playboi Carti, Moneybagg Yo, Chevy Woods, and DJ Drama! Oof! 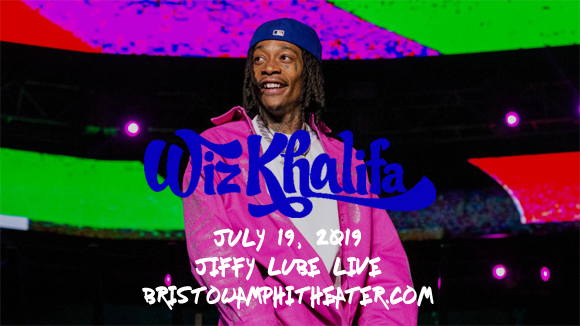 American rapper and actor Wiz Khalifa released his latest project, a mixtape entitled Fly Times Vol. 1: The Good Fly Young, this April. Khalifa made his debut in 2005 with the mixtape Prince of the City: Welcome to Pistolvania. After the release of his 2006 debut album Show and Prove, he caught the attention of Warner Bros. Records, signing with them the following year. In 2009, his single "Say Yeah" became Khalifa's first song to appear on a Billboard chart, peaking at number 20 on the US Hot Rap Songs. Two years later, he found international success with the hit "Black and Yellow", which peaked at number one on the US Billboard Hot 100 and in the top ten of both the Canadian and United Kingdom singles charts, as well as eventually gaining six-times platinum certification by the RIAA. Rolling Papers II, which is the sequel to 2011's Rolling Papers and is Khalif's most recent album, was released in 2018 and features guest appearances from Gucci Mane, Swae Lee, Ty Dolla Sign, PartyNextDoor, Bone Thugs-n-Harmony and Snoop Dogg, among others.